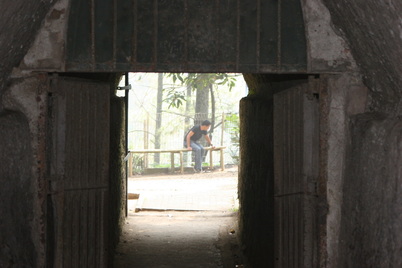 Fantasy literature provides the conduit for creativity, imagination, and adventure. Freed from the constraints of reality, we can examine our human experience from fresh perspectives.

Writing Breaking the Hold began in 1988, when as a 25-year-old, I found myself in a new city, Bandung, Indonesia. Living in a cool, peaceful town in the mountains of West Java was blissful. And, keeping something this fantastic to myself seemed like a dereliction of my assignment.

So, on an uneventful afternoon of my third year in Indonesia, I started scribbling thoughts onto a piece of paper.

"How cool it would be to fictionalize some of the insights, events, people groups, language peculiarities, friendships, struggles, and predicaments I've encountered, and weave them all into a novel." After all, writing was a better use of time than mischief. I hoped to write something that would incorporate my experiences and insights, and allow readers to taste and see developing countries in the tropics: something fun, something exciting, something that when finished, the reader would say, "Wow, that was an exciting, enjoyable ride." 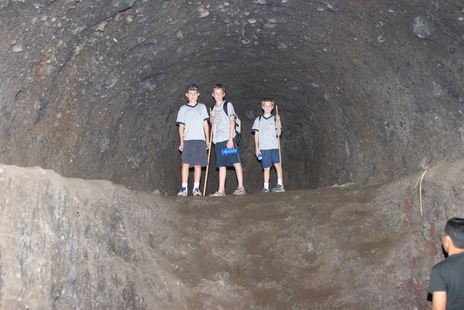 ﻿From the side of a mountain in north Bandung, colonial, pre-WWII Dutch military forces had carved out a series of man-made caves for barracks (see photo above). Half a mile away is another chain of more rudimentary caves that Japanese occupying forces had used during their four brief years there (see photo below).  Decades later, walking through on a hike, I wondered what living in such a place would have been like--the inescapable smell of damp limestone, the weight of stone above, below, and around me all the time. This is how the concept for the Hold, Pulawa’s mountain fortress, was born.﻿


After penning these ideas, a map came next. I began altering Indonesian place and river names to make my own—adding, deleting, and switching letters and syllables, spelling words backwards, and in some cases, inventing new ones. I created names that sounded Indonesian, but ones I had never heard before. However, life eventually reveals a humorous face, and over the years, I met people with some of these character names—names I thought I had invented (Herlan, Parlan, Alfina, Sita, to name a few). 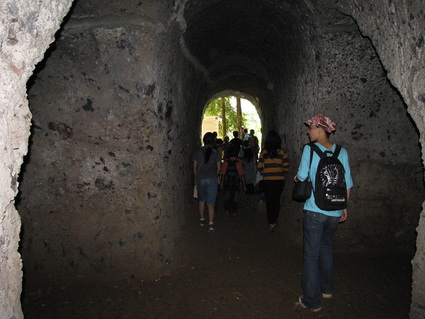 By midsummer 1988, ideas were exploding. I worked steadily on the book until my engagement in 1989. There, the project stalled until 2005.

Armed with new motivation—another chance to connect with my teenage kids—I dug up the last photocopied version I had. Technology had changed during my fifteen year hiatus in writing, and 5¼” drives and floppy disks had become extinct. Tropical humidity assured that these disks were now moldy, anyway. I had to retype everything—over 100,000 words—onto a hard drive.

Reading my work of fifteen years earlier, I recognized the writing, characters, and plot lacked depth—an embarrassing dose of reality.


But creativity juices began to flow, and I expanded the scope and complexity of the story significantly.

The Jupami were born first, followed by the Awari, and finally the Remanites. Papua, Kalimantan, the Mekong Delta, and West Java’s Sundanese people inspired Pulawa’s people groups. Banten’s Inner and Outer Badui were the model for the Inner and Outer Faithful, and the Jupami’s matriarchal culture was taken from the Minang Kabau people of West Sumatera. At the loving and gentle urging of my wife, I turned my attention to character development. Palino’s humor reflects Indonesian humor. Sage Nosan’s lofty, droning manner reflects introductory addresses at formal Indonesian events. The Great Meeting Hall scene was based on formal and informal gatherings I had attended.

Thus, I began rewriting and rewriting. Every time I had a new idea, or learned something cool about Indonesia, I wove it into the story. I wanted Breaking the Hold to be as fresh and original possible.

BACK TO "GENERAL AUDIENCE"

﻿BACK TO "MY WRITING"

BACK TO "HOME"﻿
Powered by